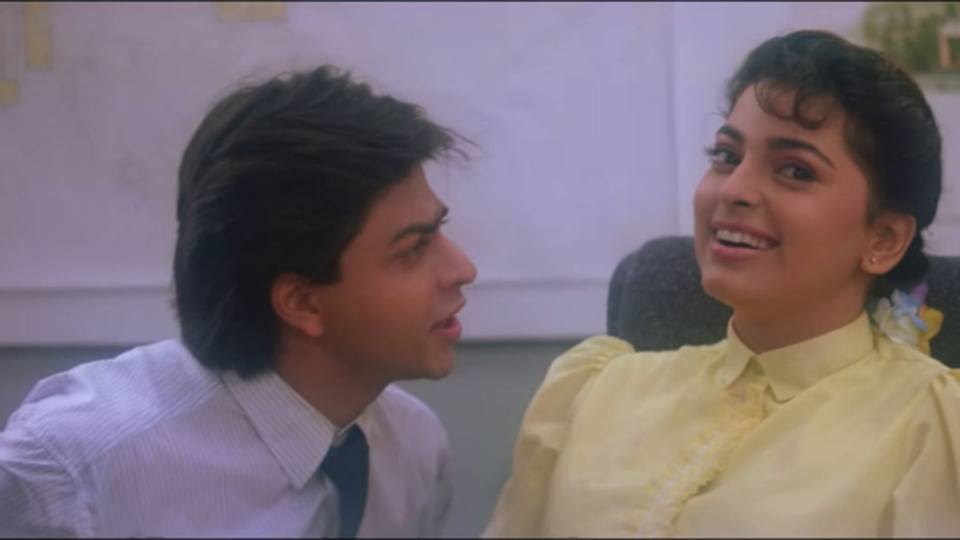 Juhi Chawla is the ultimate comedy queen of Bollywood who is best known for her comic performance in the movies from ’80s and ’90s. Known for her million-dollar smile and bubbly onscreen personality, the actress aced the comedy genre with her acting abilities. Juhi got crowned Miss India in 1984. The actress started her career in Bollywood in the year 1986. From there, she went on to work in numerous films in the Indian film industry. So, let’s take a look at some of her funniest roles.

Hum Hai Rahi Pyar Ke, directed by Mahesh Bhatt is a family comedy movie starring Juhi and Aamir Khan in primary roles. The story revolves around the life of Vaijanti Iyer who runs away from her family to avoid getting married to an orthodox South-Indian man. The narrative of Hum Hai Rahi Pyar Ke is quite comical, and the series of events that take place are humorous.

Jhankaar Beats released in the year 2003. It is an Indian musical comedy film featuring Juhi, Sanjay Puri and Rahul Bose among others. Juhi plays the role of Shanti, a homemaker-wife who is seven-months pregnant with her second child. The narrative is based on the life of two copywriter brothers and their apprentice who compete in a musical contest. Jhankaar Beats is a lighthearted movie that has consistent funny situations, hilarious one-liners and numerous feel-good moments.

Ishq is a comedy indian movie that stars Juhi, Aamir Khan, Ajay Devgn and Kajol in significant roles. The story is about two wealthy businessmen Harbans Rai and Ranjit Rai who loathe poor people. However, Harbans Rai’s daughter Madhu, falls in love with a poor mechanic Raju, and Ranjit Rai’s son falls in love with a poor girl Kajal. The movie has hilarious scenes and even funnier dialogues that will have you laughing out loud.

This is a romantic-drama film that released in 1992. The film starred Juhi Chawla, Shah Rukh Khan and Nana Patekar in lead roles. In the movie, Juhi plays a sweet and lovable character Renu who helps Raju acquire a job in her company. The narrative is quite romantic, it is about a young man romancing a beautiful woman, and at the same time, he tries to make it big in his career. Raju Ban Gaya Gentleman has a lot of comedy scenes that gives the audience a good laugh.

The David Dhawan directorial Deewana Mastana is a romantic-comedy film. In the movie, Juhi plays the character Dr. Neha Sharma who is a psychiatrist. She gets pursued by both Raja, a small-time crook, and Bunnu, a patient. As the story proceeds, the plot gets funnier as the two men compete with each other to win Neha’s heart. The right comic timing and the hilarious script makes it one of the best comedy Indian movies of Bollywood.

After living a whole year indoors due to the pandemic, the world could use a laugh and what’s better than watching comedy. The above list of comedy movies will surely help fire you up any time you’re in need of a serotonin burst. To watch some great comedy movies you can look up for it on Hotstar. It is among the best online streaming platform in India where you get unlimited access to movies and web series. Get your Hotstar subscription today!

Get 5 Of The Most Effective Poker Playing Tips Through poker

The Best Live Coverband For Weddings And Other Special Occasions

Choosing a Music Subscription Service in 2021